Fly a MiG! Perform thrilling manoeuvres while sitting in the cockpit of the MiG 29 Fulcrum. Welcome to Russia, the only last for supersonic flights! MiG 29 jet flights are carried out at the SOKOL Aircraft Building Plant in Nizhniy Novgorod, Russia, 400km away from Moscow. Here you get the opportunity to enjoy a MiG ride in one of the Russia’s Air Forces most lethal front-line fighters: The MiG 29 Fulcrum. Designed during the cold war as back bone of the late Soviet Union’s Air Force, this truly amazing fighter jet is now ready to give you a ride.

Enjoy a Supersonic Flight in the MiG-29

The two-cockpit MiG-29UB jet fighter is used for training and is now available for you! 40-Minutes supersonic flights are available from EUR 12,500.00. Below you can find more information regarding Russian MiG 29 flights – or if you want to book the jet flight straight away, please use the form below.

What are the requirements to book a flight in the MiG-29 Fulcrum?

If you’re healthy, you’re probably good to go. See a detailled list of what’s needed for a MiG flight.

Fly MiG 29 jets in Russia with FlyFighterJet.com: What will I get?

You’ll get a thrilling 25 or 45 minutes jet ride including:

Also available for an additional fee:

Is there something more before/after the MiG-29 flight?

We wouldn’t be the aviation fans and companionable hosts we’re famous for if we’d let your adventure end at the Sokol Aircraft building plant in Nizhniy Novgorod. In our years of experience in offering such flights, we learned that our clients’ needs are as diverse as it gets. From drinking vodka in Nizhniy’s truly Russian Lainer restaurant while waiting for the S7 flight from Nizhny Novgorod back to Moscow and cheering for a great MiG-29 or MiG-31 flight to enjoying the happy hour in Moscow’s famous Boar House (five Long Island Ice Teas for 4€…) – we had a great time with all of you who flew the MiG-29, MiG-31 or L-39 in Russia! We did tours along the Moscow Metro to marvel at the precious architecture, we’ve been to Monino to look at the TU-144 Supersonic Passenger Jet and other unique expositions, we’ve travelled all along the Golden Ring for clients who asked for it. However, some people just come and go or have other plans before and after the flight.
For those, we gladly organize just the flight in a straightforward and cost-effective way. In short: For those of our clients who are interested in seeing a bit more of Russia and have a great adventure before and after the flight: We gladly advise you on places to visit, point to you the best bars, restaurants or hippest of clubs. Just let us know what you expect from your trip to Russia and we’ll take care of the rest.

What does it cost to fly a MiG 29 supersonic jet?

Currently, a 25 minutes flight costs EUR 12,500.00, including all paperwork and transfer plus translation services. However, prices are subject to change. We promise you that you won’t find these flights for a better price anywhere else. We also offer Edge of Space Flights in the MiG-29 – with altitudes reached up to 22km!

The only Supersonic Jet for Passenger Flights Worldwide

The Mikoyan MiG-29 Fulcrum is an extremely powerful figher aircraft. It climbs at a rate of 330m/s and has a thrust/weight ratio >1 – which means it can accelerate when climbing vertically. Just like a rocket. The MiG-29 is the only supersonic fighter jet available for flights with Civilians, worldwide. In other words, your one and only chance to break the sound barrier. On top of that – you have a higher back seat to ensure you have a great view over the pilot – and the Fulcrum is also a very nice and sporty looking plane with excellent manoeuvrability. In short – the perfect fighter jet to fly in. It is very well maintained and flown by test pilots.
The MiG-29 is a modern 4th generation multirole fighter used by many Air Forces, also in the NATO.

Is there something more?

The MiG-29 flight can’t be booked on short notice – we’ll need at least 60 business days to get airbase access in Russia. Russia has a lot to offer, especially for aviation freaks. We recommend to stay in Moscow for two or three days and visit the famous Monino museum and Star City. Whatever you prefer, just let us know and we will make your Fighter Flight Adventure in Russia even better. We have a Russia specialist taking care of all your needs and travel arrangements.

Want to come as close to Space as possible? Contact us to inquire about or book a MiG-29 Edge of Space Flight

Please use this form to book a mig 29 flight or send us an inquiry. The more fields you fill out, the better we can advise you.

Some Impressions of the MiG-29 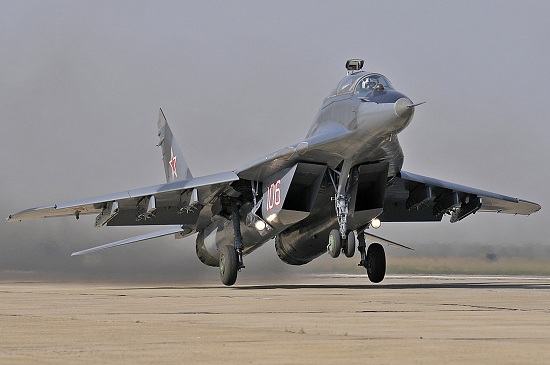 "How can I say this in a polite way... It was THE greatest experience in my life to fly with the L-39. It was the most violent, stunning, breathtaking and coolest thing I have ever done. Only a ride in a even more powerful jet can beat this. My smile has grown even bigger and I can't wipe it off. I just need to see the pictures or video from the day and then, I'm right back in that moment. This was the best day of my life" - Michael, Denmark