The Northrop Grumman X-47B Pegasus is a very unusual aircraft. Designed to execute missions likes any other multirole fighter jet but without a pilot on board. To handle such a responsible task the X-47 from the beginning has been developed as an autonomous aircraft. That means it would fly in all possible weather conditions, at high altitude on long range sorties, simultaneously cooperating with other vehicles and satellites without human interference. Of course, engineers and officers supervise drones during flights and missions, but still there is no one on board. Moreover, the X-47B is amazing because of its construction. The flying wing structure and the stealth technology make it low observable and give it high aerodynamic efficiency which allows for long range series. Another assumption of the project was the possibility to operate it from the Navy carriers which is probably the greatest difficulty for constructors.  The unfriendly environment, folding wings, take-offs, landing, and operating on the carrier’s deck had to be taken into consideration. All this is really difficult for experienced pilots so one can only imagine how complex and advanced this project is.

The Navy considers Pegasus to be the perfect aerial vehicle for surveillance and reconnaissance, striking and penetrating an enemy’s air defense system missions. The payload capacity during stealth missions (4500 lb.) and aerial refueling really improve its capabilities. Furthermore, if technology and budget allow, there is a chance for air defense equipment and combat flights.  All those aspects make the X-47 one of the most advanced weapons of the future, and who knows, maybe the best.

The complicated history of the UCAS-D program and the long road to the first X-47 flight. 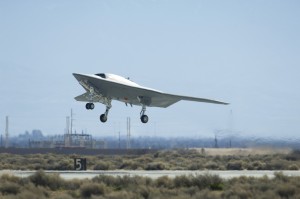 In the second half of the 1990s Boeing and Northrop Grumman individually initiated the projects of UAV (unmanned air vehicle) under private funding. In June 2000, the DARPA (Defense Advanced Research Project Agency) together with the US Air Force and US Navy developed a program of UCAV and gave money and green light to mentioned companies. Boeing X-45 was designed for the Air Force and Northrop X-47A for the Navy. Because of similarity of both projects, the government decided to scale them into the one, named J-UCAS (Joint Unmanned Combat Air System). A few years after that the US Air Force lost interest in the project and abandoned it. Since then the Navy has taken over the J-UCAS program and together with Northrop Grumman continued the project under a new label UCAS-D (Unmanned Combat Air System – Demonstrator). In December 2008 the completed prototype of X-47B Pegasus was officially unveiled and there began a long and advanced program of test flights, launches and recoveries on an airfield and an aircraft carrier at sea.

The X-47B’s first historic flight took place at the Edward Air Force Base on the 4th of February 2011. It took 29 minutes and provided information and test data of the aerodynamic control, navigation systems and all basic avionics. This flight was a verification of all pre-flight preparation and design of the tailless construction. Moreover, for everyone devoted to the project it was a sign that they had made a great job despite all the problems. The Navy is planning the first carrier trails for 2013. Now the UCAS-D program is preparing the X-47B for it at the Edward Air Force Base and we are looking forward to the first carrier take-off and landing.

The X-47B is not only an armed drone

Modern warfare requires new kinds of technology and weapons to be used on battlefield. That is the reason why UAVs (Unmanned Aircraft Vehicle) during the last years have changed from unarmed reconnaissance aircraft to fully weapon-equipped fighters.  A great example could be the General Atomics MQ-1A Predator which is equipped with Hellfire anti-armor missiles. Currently few countries decided for that kind of weapon. What is interesting is the fact, that the costs of the drones and the development programs are much cheaper than fighter jets. The same applies to trainings for operators. Moreover, aircraft pilots are not in danger during missions what is one of its biggest advantages. The direction of the technology development clearly shows that most likely one day the drones will display the fighters. We write an article about this topic on the MiGFlug blog, you can find it unter MiGFlug.com/jetflights.

More detailed information about the X-47B on globalsecurity.org

The article about First Flight of the X-47B on air-attack.com

The Northrop Grumman’s video of the X-47B maiden flight

Which is the fastest plane in the world? Check your knowledge here

Back to the world of the manned fighter: The best flying ace in history